During the COVID-19 pandemic we have been fully operational and look forward to speaking with you. 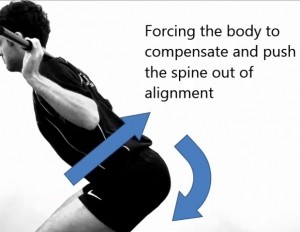 A common exercise a personal trainer might recommend for good all-round muscle development is the back squat.

The back squat is predominantly a lower-body exercise and therefore will work the quadriceps, gluteus maximus, hamstrings and lower limb muscles such as the gastrocnemius and tibialis anterior.

However, as the exercise requires the weight of the bar to be transferred from the back of the shoulders into the legs through an upright trunk, it will also recruit the trunk musculature, including the erectus spinae, the rectus abdominus, the transverse abdominus, the internal and external obliques, the trapezius, the rhomboids and the latissimus dorsi.

The back squat is therefore classed as a compound exercise, as it recruits a large number of muscles in the body.

The benefits of using a squat in training

A personal trainer will be able to explain the benefits of the squat as follows:

As usual the client’s progression depends on ability and what the fitness instructor feels is appropriate at each stage.

A squat is classed as a gross motor skill, as it recruits a large number of muscles and requires them to co-ordinate themselves in one efficient movement. It will therefore improve a client’s inter-muscle co-ordination as well as intra-muscle co-ordination, which will help a muscle to contract more efficiently.

A squat also transfers well into everyday tasks, as well as other gym-based activity. By improving the strength of the trunk and the lower body, it will make tasks easier, from getting up from a chair, to walking up and down stairs, to picking up shopping bags.

In addition, improving the ability to carry out a back squat will correlate to an increased ability to jump higher, run faster, turn quicker and reduce injury to the lower limbs.

How to perform a squat

A personal trainer should ask their client to stand with their feet slightly wider than hip width apart. This is because they need sufficient space for their hips to drop into, rather than pushing them back. The knees should track over the toes and the posture should be upright, with the spine in a neutral position and head facing forward.

Once the position has been established, the client should flex simultaneously at the knees and hips, making sure that the weight goes through the back of the foot and the spine remains in a neutral position.

How far the client can continue the squat will depend on their muscular strength, but a personal trainer should also look out for hyperextension or flexion of the spine, as this means the force is being transmitted through the vertebrae of the spine rather than the muscles, risking injury. Equally, the weight should be put through the heel of the foot rather than the toes.

Over a period of time, a client can progress from 90° to parallel and further. Increasing the depth of the back squat will improve the development of the muscles that are being worked, in particular the gluteus maximus, which will give a more balanced physique.

Using dumbbells in a squat

The squat can initially be performed as a body weight squat and then progressed to a squat using weights. From there the fitness instructor can progress their client to a squat using dumbbells and eventually on to a barbell back squat.

Did you enjoy this article?