During this COVID-19 crisis we are working remotely, fully operational and look forward to speaking with you. 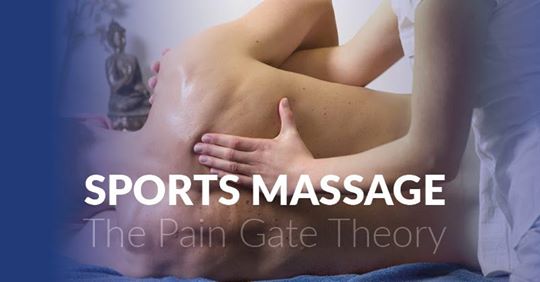 Sports massage targets the muscles, skin, lymphatic system and neuroendocrine system – and the Pain Gate Theory suggests that it can also have an impact on how pain signals reach the brain.

In this blog on the Pain Gate Theory, we look at how pain messages can be blocked through physical means, such as sports massage, as well as through emotional and cognitive ways.

The Pain Gate Theory – what is it?

Pain is felt when pain messages from various parts of the body reach the brain.

The Pain Gate Theory suggests that these messages can be blocked by inhibitory neurons in the central nervous system. Located in the spinal cord leading up to the brain, these “nerve gates” can differentiate between the small and large nerve fibres that carry pain signals.

Activity along the large nerve fibres affects the inhibitory neurons and lessens the strength of pain signals.

While the intensity of the pain signals is a factor in how pain is felt, techniques used in sports massage, such as touch, pressure and vibration – along with the resulting increase in tissue temperature – are believed to have an effect on the Pain Gate.

Because the pain signals are less intense than the non-pain sensory signals from the sports massage, this causes the pain messages to be slowed, reduced or stopped altogether.

It’s the same theory behind why we instinctively rub an injured or painful area of the body. It has also led to the development of the TENS (Transcutaneous Electrical Nerve Stimulation) machine. This is in widespread use for mild to chronic pain conditions and also for women going into labour.

Who is behind the theory?

The Gate Control Theory was put forward by Ronald Melzack and Patrick Wall in 1965. They believed that the perception of pain was more complicated than the simple idea that the intensity of pain matched the damage caused to tissue.

This theory has led to the development of a variety of pain management strategies over the years.

What else affects pain messages?

The Pain Gate Theory also says that the way pain is felt can not only be affected by touch but also by our thoughts and emotions.

Pain can be felt less when a person:

The distraction and positive feeling of wellbeing brought about by sports massage could therefore potentially reduce the intensity of pain signals, as well as the effect of the physical aspect of the massage.

Conversely, people who are frightened, under stress or suffer from depression, or who worry about or focus on their pain, are more likely to have “open” pain gates. Equally, if someone expects an injury to hurt, they will feel it more intensely.

Although there have been some criticisms and modifications to the original theory over the years, the Pain Gate Theory has sufficient traction to be used as a tool for pain control, whether short term after an injury or long term for a chronic condition such as fibromyalgia or arthritis.

Did you enjoy this article?